A Conversation with My Newly Diagnosed Self 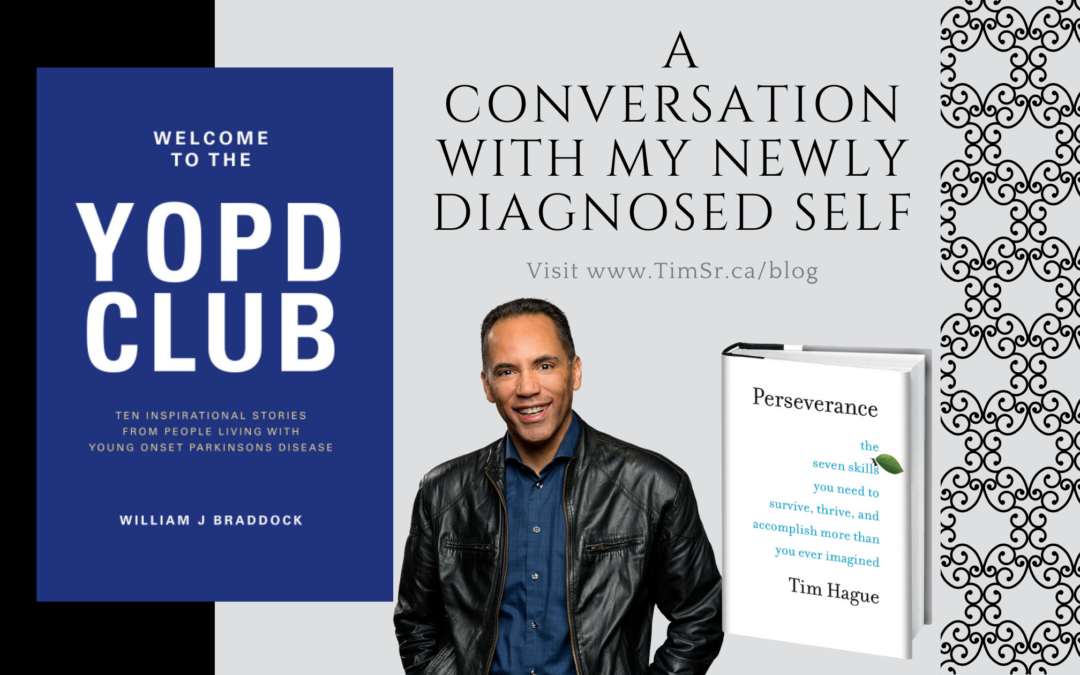 Okay, maybe that’s not the way I would start the conversation but it would be very tempting. That is an awfully tough way to start a conversation though. Furthermore, it may not be true for you as a person newly diagnosed with Parkinson’s disease.  But, then again it may be. In almost ten years with Parkinson’s disease my experience is that we as a community tend to gloss over our more difficult realities. We don’t like to go to the really hard places of this disease. I know that I have wanted to focus on hope, encouragement and exercise and while the importance of these have not changed I have come to see another need. That need is the awareness, a warning, that some do die from this disease and it can be so much more difficult than ‘just a tremor’.

I knew it or at least I had a sense of it. I had seen my father live out his last years with Parkinson’s being one of his many ailments. I had nursed many others with this disease. But you don’t really ever know a thing until you have lived with it for a time. These many years later there are a number of things I would go back and tell my 46-year-old self if I could.

I would tell myself that this disease is horrible and the younger you are when you get it the longer and potentially worse it will be. For you see it won’t kill you; at least not quickly. It will let you live while it tears strips off your life, steals your abilities and attempts to crush your dreams. You will be told over and again that Parkinson’s does not define your life, yet, for most, it will come to set the rules of your every waking hour not to mention many of those in which you try to sleep. You will see spouses broken and marriages shattered; the fittest of individuals hobbled, rich, productive minds left clouded. You will witness the buckling of brave souls beneath the weight of an unrelenting foe.

These are the things we are seldom told or are said quietly in passing on our way to the ‘you can do this’ cheering section.

It may be that none of these things will ever apply to you, but then again, they may. They certainly apply to many who struggle with PD.I understand that this is likely not what you want to read. You would likely be far happier with my book, Perseverance; the seven skills you need to survive, thrive and accomplish more than you ever imagined. It’s an inspirational piece guiding you in how-to skills in living your best with Parkinson’s. It’s totally positive. But…

I would tell myself early on that many are far to cavalier with the positive messages attributed to Parkinson’s; these ideas that ‘Parkinson’s will not define me’, ‘It’s not a death sentence, it is a life sentence’ and on and on. Recently, an elder entertainer was diagnosed in their 80’s and made the statement that, ‘this PD thing is no big deal’. I was angry.

Angry because of an attitude that did not take the time to know my friends whose lives have been brought low by Parkinson’s. Those in their 30’s, 40’s, and 50’s whose bodies will no longer heed their commands. Limbs that flail or that will not move at all. Guts that will not absorb nutrients and slowly starve their bodies. Bodies that simply refuse to accept most medications. Those who function at all only due to a miracle surgical procedure where electrodes are placed in one’s brain. Those living with all this while attempting to raise children and keep marriages and their lives together. No, this PD thing is no big deal.  It can be a nightmare.

I would tell my 46-year-old self that you must hear the whole truth in the statements made about Parkinson’s. For example; ‘Parkinson’s is typically a slow moving, or progressing, disease’. This is great news unless you ask the question, ‘compared to what?’ compared to a cancer like pancreatic cancer which tends to be a death sentence then, yes, PD is great news. However, few ever really explain what the ‘slow moving’ will look like or do to you. If you are diagnosed at say 46 and you get a solid ten to fifteen years out of life that means that you are between fifty-six and sixty-one when you run out of ‘solid years’! A reasonably young person still pre-retirement age but none the less worn out by the drip, drip, drip of a chronic and progressive disease that is ‘slow moving’.

Our community, like much of society, can find it difficult to talk about mental health. Yet more than 50% percent of us will suffer with depression, anxiety and various psychological concerns. That’s a big number. I would have told my newly diagnosed self to add a psychologist to my healthcare team sooner, from the beginning.

There are many other things I would add to the list of advice and warnings that I would have given myself some ten years ago:

Don’t quit your job too soon. Freedom 51, or my play on the old insurance commercial ‘Freedom 55’, is not fun.

Start your meds (levodopa) sooner. Had I done so I am convinced I would have gotten another few years out of my job. For the guy who never really enjoyed going to work every day it has been much more difficult not being able to go to my chosen profession every day. Had I started the meds sooner I believe I would have had an all around better quality of life in my early years.

Don’t ever stop running. Don’t ever stop cycling. Exercise…more. Running and cycling have been my outlets for exercise. Whatever yours are don’t stop doing them. As a matter of fact, do more. This is one measure of control that you can retain in positively impacting your symptoms.

Travel more. That is have fun, enjoy life. Whatever it is that you like to do, do more. There is a hard stop coming, a day when you will not be able to do some of the things you want to do. Do them now.

Be joyful. Be content. Practice perseverance. Give hope. I would tell my 46-year-old self that this disease is different for everyone and that my journey, has thus far, been easier than most. Yet, even then most of the others will be happy, joyful, content, they will stay on their journey and offer me hope. I would tell myself that no matter how dark my days get there are those living darker lives. Be grateful, offer hope.

I would tell my 46-year-old, newly diagnosed self; in the midst of attempting to understand and respond to the whole of the disease not to lose focus…don’t lose hope. I would remind myself that only through embracing our suffering do we learn to persevere, that through perseverance our character is deepened and through this change in character we discover hope. There is no hope without first embracing the suffering.

I wrote the following as the forward to the book Welcome to The YOPD Club by William J Braddock. You can order your copy through Amazon.

Tim is a retired nurse of 20+ years who devotes his time to professional speaking, writing and as founder of the Parkinson’s wellness centre, U-Turn Parkinson’s. He is a cofounder of the global alliance The PD Avengers. He is a published author (Penguin Random House Canada) of the bestselling book Perseverance: The Seven Skills You Need to Survive, Thrive and Accomplish More Than You Ever Imagined. He has spoken for Tedx and is sought after across North America for his motivational and inspiring topics, Live Your Best and The Power of Perseverance. After having been diagnosed with Young Onset Parkinson’s Disease at the age of 46 Tim and his son went on to win the first season of the reality television series The Amazing Race Canada. He is an outspoken and effective advocate on behalf of people living with Parkinson’s around the world. To learn more about Tim’s work visit: www.TimSr.ca,  www.UTurnParkinsons.org and www.pdavengers.com [/author_info] [/author]